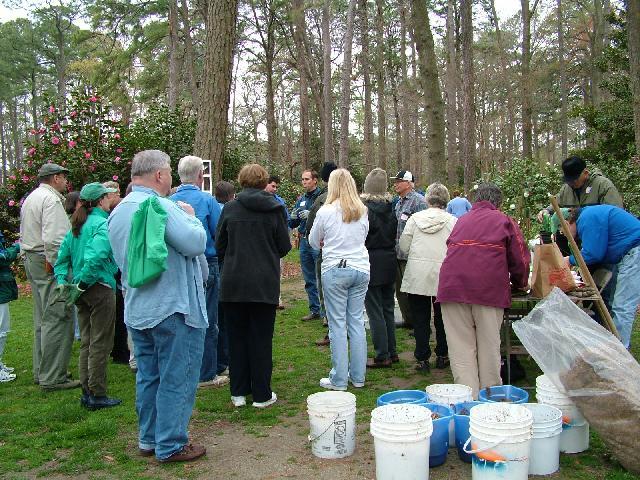 The morning of April 5, 2014, began with temperatures in the sixties, but as the morning progressed and we prepared for our spring workshop in the Hofheimer Camellia Garden, the temperature rapidly plummeted to the low fifties. However, there was some sunshine and no rain. As the time to begin the workshop approached, it began to warm up a little and we ended up with a fairly comfortable day to work.

Thirty-eight people were in attendance. Following introductions, Mike Andruczyk gave an erudite discussion of diseases that affect camellias. This generated many questions from the audience validating the need for such a presentation. Next, Doug Simon gave a demonstration of proper pruning of normal sized camellias to improve their health and control their size and shape, while Mike Andruczyk demonstrated the pruning of overgrown camellias. We then divided into two groups, those experienced in air-layering and those inexperienced. They then went out in pairs and put on 211 air-layers that will be removed and pott ed up at our August 23, 2014 workshop and subsequently sold to raise funds for the support of the Hofheimer Garden. We sold 2 VCS memberships and 1 ACS membership.

Our horticulturist Matthew Gobla brought a nice collection of air-layers from last year’s workshop and 11 of these were sold for $15.00 each, providing funds for the Hofheimer Garden.

This was once again a highly successful workshop that provided education to the public and support to the Norfolk Botanical Garden, the VCS and the ACS. Many thanks to all who attended and helped to make this possible. We were especially glad to see Jim and Sally Van Gorder who came all the way from Jacksonville, NC and brought their grandson Seth Van Gorder and his wife Ashleigh who live in the area.